Snow festival 2016 – Sapporo, Japan. Here I am, in the coldest place in Japan: Hokkaido. In these days Sapporo, the most important city in the region of Hokkaido, is more full of people than ever . The reason? It’s Snow festival time! This year it also occurs in the same period of the Chinese New Year celebrations, so the city is even more crowded. Hotels are awfully crowded during the year and so are restaurants, all because of Snow Festival.
This year it is the 67th edition. It started in 1950 with six students building six snow statues in Odori Park, the biggest square in Sapporo. In 1955, the Japan self-defence Force, from the nearby Makomanai base, joined in and built the first massive snow sculpture, for which the Snow Festival has now become famous. Today the main sites of the festival are Odori Park, Susukino and Tsudome, this last one as a children play-park.

It is a park extending for 13 blocks in the heart of the city. Every block has its main name and theme: International Competition Sculptures, with 10 snow sculptures made by artists from all over the world; HTB park with a Jumping platform for freestyle skiers and snowboarders; STV square with the giant Attack on Titan snow sculpture; HBC Macau square with the large snow sculpture of St.Paul Church in Macao, Restaurant square, etc.
During the day walking through this park is exciting, with good smell coming out from all the food stalls, and performance of singer and dancer on snow stages; but it is from the sunset that the show reveal his true nature. When the sun goes down colourful lights turn on everywhere and audio-visual shows make the snow statue alive. Even a strong snow-storm can not stop the party!

It is the street near Sapporo Station, and in these days (usually from the 5th to the 11th of February) hundreds of ice sculptures invade the street. It is called Susukino Ice world. There is no point in visiting it during the day, because it is in the night-time that this place becomes alive. Lights are everywhere on these ice sculptures representing fishes, beer glasses, dragons, birds, chefs etc. Thrones, also, and a little train for children to seat in have been made, and a Curling play path, where adults can show their abilities in this sport.

As I saw, there is not an official main theme, but this year the new train Shinkansen Hokkaido, which will begin to run from March 2016 and will finally connect with high speed trains Tohoku region and Hokkaido region, is mostly everywhere. Shinkansen snow sculptures with a horse, with a puppet, old trains, new trains, as a souvenir or on the food.

The Snow Festival has to been seen once in a lifetime! But for sure it is not easy to reach. Here some photos that will give you a hint of this unique experience. Enjoy! 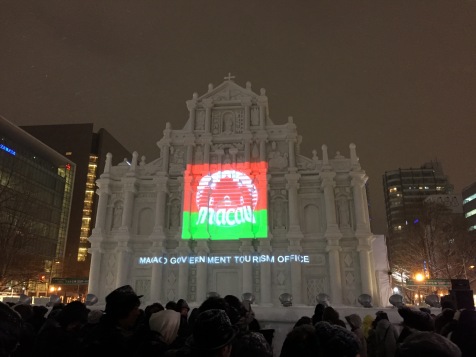 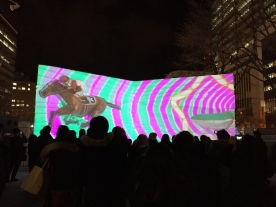 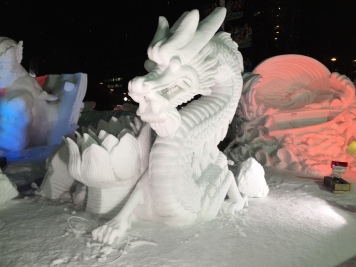